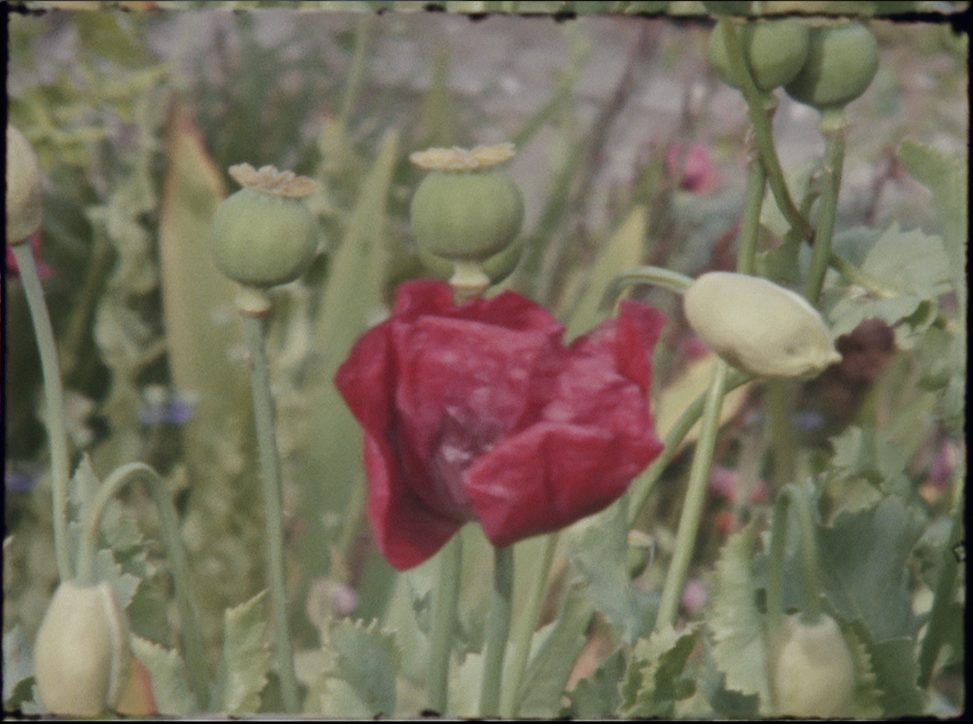 Purkyně’s Dusk is an experimental short film about shifting colour perception according to the degree of illumination. It uses both analog and digital colour manipulations to create an intense and sensory defying visual experience based on the observations of light and colour carried out by the Czech physiologist Jan Evangelista Purkyně in the 1800’s.

“Initially one sees only black and grey. Then the brightest colours, red and green, appear darkest. Yellow cannot be distinguished from a rosy red. Blue looks to me the most noticeable. Nuances of red, which otherwise burn brightest in daylight, namely carmine, cinnabar and orange show themselves as darkest, in contrast to their average brightness. Green appears more bluish, and its yellow tint develops with the increasing daylight” (New Contributions, Jan Evangelista Purkyně, 1825, pp. 109–110).
The visual effect he described in 1825 determines that our perception of colour is dependant on the degree of illumination. Both the identifiable tints and the contrast between colours are perceived differently in bright or low light conditions.The images for this film were captured in super8mm colour and black and white, in a garden setting on a late summer afternoon edging towards dusk. Two static figures appear in the artificial nature of a garden decor, filmed evenly as living models alongside flowers and plants in changing light replete with bright colours and patterns.
In the editing process, digital effects of de-saturation and contrast variation were used to alter the digitally transferred images, in combination with photo-chemical manipulations such as toning, dying, and colorisation applied onto the black and white original footage.
As a visual experience that “plays on our eyes and disrupts all our senses”, the film aims to defy our perception of colour representation and shed new light on the artistic and conceptual relations between analogue and digital techniques.

“Jan Evangelista Purkyně was a Czech physiologist who, in the mid-19th century, conducted a series of studies on light and color, which came to the conclusion that the human perception of color depends on the intensity of illumination. Two centuries later, Helena Gouveia Monteiro studies, through artistic creation, the different visual and cultural recognitions engendered in humans by the various perceptions of language and audiovisual experiences. In “Purkyně’s Dusk”, her debut work at Curtas, the artist captures Super 8 footage of a garden in the late afternoon of a summer day, both in color and in black-and-white. This dusk, with a fainter contrast of figures, was later manipulated, in editing, with the use of both digital desaturation and more traditional photochemical processes of photography. Helena Gouveia Monteiro creates an eminently visual experience, reminiscent of the famous Kodak’s “Shirley Cards”, and enhanced by the absence of sound, which challenges the viewer to question their own perception.” 29th Curtas Vila do Conde – International Film Festival